The Path #1 is laid out in a grid utilizing 2 columns and 3 rows.

The first of the 3 rows shows your rational or intellectual thoughts concerning your question. The second row is concerned with your emotional attitudes, meaning your feelings. The bottom row represents your posture or stance, meaning how you project yourself outwardly, to the world.

The left column shows how you currently think, feel, and act regarding your concern. The right column gives advice on how you would be better served if you changed your attitudes on these 3 levels. The trick is to compare and contrast the 2 columns, which will give you hints as to what the cards mean and how you should make certain changes, small or large. 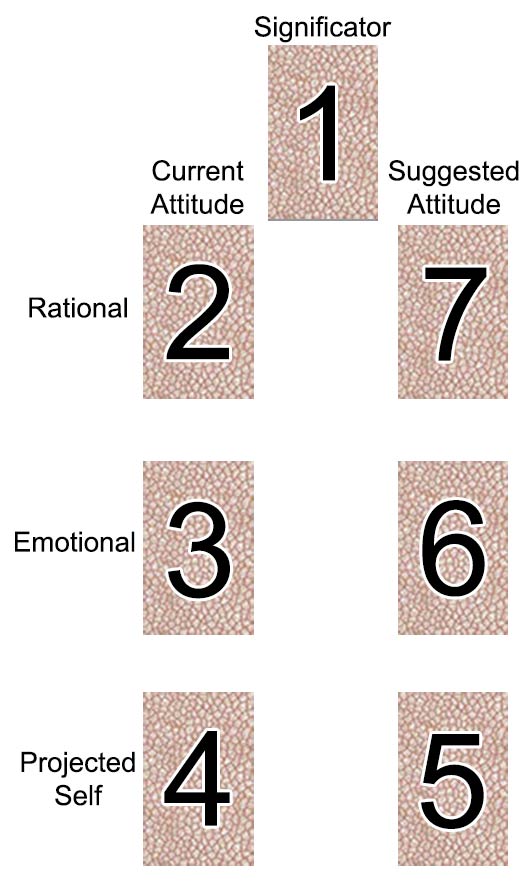 He wears the triple crown and is seated between two pillars, but they are not those of the Temple which is guarded by the High Priestess. In his left hand he holds a sceptre terminating in the triple cross, and with his right hand he gives the well-known ecclesiastical sign which is called that of esotericism, distinguishing between the manifest and concealed part of doctrine. It is noticeable in this connexion that the High Priestess makes no sign. At his feet are the crossed keys, and two priestly ministers in albs kneel before him. He has been usually called the Pope, which is a particular application of the more general office that he symbolizes. He is the ruling power of external religion, as the High Priestess is the prevailing genius of the esoteric, withdrawn power. The proper meanings of this card have suffered woeful admixture from nearly all hands. Grand Orient says truly that the Hierophant is the power of the keys, exoteric orthodox doctrine, and the outer side of the life which leads to the doctrine; but he is certainly not the prince of occult doctrine, as another commentator has suggested.

He is rather the summa totius theologiae, when it has passed into the utmost rigidity of expression; but he symbolizes also all things that are righteous and sacred on the manifest side. As such, he is the channel of grace belonging to the world of institution as distinct from that of Nature, and he is the leader of salvation for the human race at large. He is the order and the head of the recognized hierarchy, which is the reflection of another and greater hierarchic order; but it may so happen that the pontiff forgets the significance of this his symbolic state and acts as if he contained within his proper measures all that his sign signifies or his symbol seeks to shew forth. He is not, as it has been thought, philosophy - except on the theological side; he is not inspiration; and he is not religion, although he is a mode of its expression.

Marriage, alliance, captivity, servitude; by another account, mercy and goodness; inspiration; the man to whom the Querent has recourse. 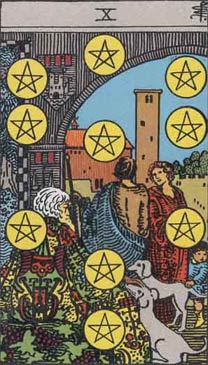 A man and woman beneath an archway which gives entrance to a house and domain. They are accompanied by a child, who looks curiously at two dogs accosting an ancient personage seated in the foreground. The child's hand is on one of them. 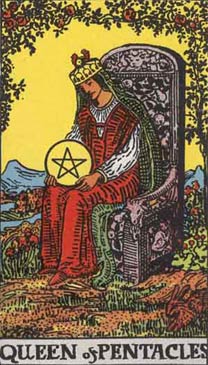 The face suggests that of a dark woman, whose qualities might be summed up in the idea of greatness of soul; she has also the serious cast of intelligence; she contemplates her symbol and may see worlds therein. 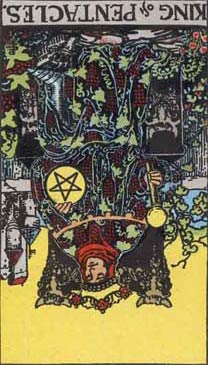 The physical and emotional nature to which this card is attributed is dark, ardent, lithe, animated, impassioned, noble. The King uplifts a flowering wand, and wears, like his three correspondences in the remaining suits, what is called a cap of maintenance beneath his crown. He connects with the symbol of the lion, which is emblazoned on the back of his throne. 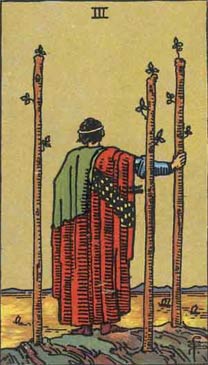 A calm, stately personage, with his back turned, looking from a cliff's edge at ships passing over the sea. Three staves are planted in the ground, and he leans slightly on one of them.

He symbolizes established strength, enterprise, effort, trade, commerce, discovery; those are his ships, bearing his merchandise, which are sailing over the sea. The card also signifies able co-operation in business, as if the successful merchant prince were looking from his side towards yours with a view to help you. 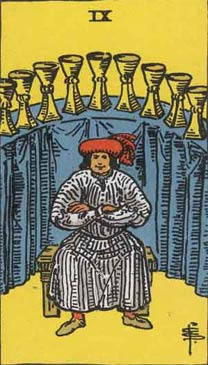 A goodly personage has feasted to his heart's content, and abundant refreshment of wine is on the arched counter behind him, seeming to indicate that the future is also assured. The picture offers the material side only, but there are other aspects.

Concord, contentment, physical bien-?tre; also victory, success, advantage; satisfaction for the Querent or person for whom the consultation is made.